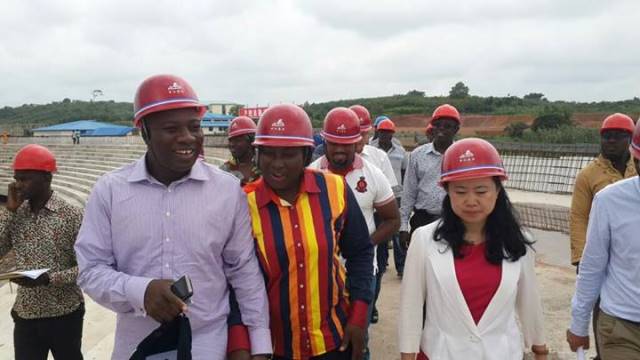 The Minister for Youth and Sports, Hon. Mahama Ayariga, the Chinese Ambassador to Ghana, H.E. Sun Baohong, and the MCE for Cape Coast, Ms. Priscilla Arhin over the weekend, paid a working visit to the Cape Coast Sports Stadium to inspect progress of work there.

H.E Sun Baohong stated that she was happy to accompany the Minister to inspect the stadium adding that the visit was an evidence of the strong bond between Ghana and China.

The Ambassador said that even though the Minister assumed office not too long ago, he has showed lots of commitments and dedication to the completion of the project.

She indicated that the Cape Coast Sports Stadium was a people-centred project and tasked the Chinese workers to work very hard to finish the project within the scheduled time.

She mentioned China’s long standing relationship with Ghana and recounted some of the numerous projects the Chinese government is undertaking in the country such as the expansion of the Vocational Training project, electricity, gas, and the Cape Coast market among others.

The Ambassador assured the Hon. Minister that her government would continue to support projects in Ghana as a symbol of their friendship.
The Cape Coast Sports Stadium project manager, Mr. Tang showed a presentation on the profile of the sports stadium and indicated that the Chinese aid project would cost 30 million US Dollars after completion.

The project manager indicated that he was facing some challenges such as tax and duty exemption on local and imported materials, resident permit for Chinese staff and the need to quickly settle the site’s water and electricity bills by the Ministry of Youth and Sports.

On his part, Hon. Ayariga thanked the project manager for the opportunity to go round to inspect works at the stadium. He indicated that he was impressed with the speed of work, adding that he had no doubt that the project would be completed within the scheduled time.

The Minister expressed gratitude to the Chinese government for the grant to construct the stadium and said that he was looking forward to establish similar facility in all the regions to promote and develop sports in the country.

He mentioned that Ghana has the potential to develop sports and encouraged Ghanaians to take sports seriously since it makes people healthy and reduces expenditure on health care.

Hon. Ayariga assured the contractor of the sports stadium that he would convene a meeting at the Ministry to expedite action on the challenges the contractor has raised. He stated that he would meet the Minister for Interior to address the issue of resident permit for the Chinese staff and also added that the electricity and water bills would soon be paid by his Ministry.

The Minister assured the Ambassador that the numerous investments the Chinese government was making in Sports would not go waste but rather it would be put into good use to achieve the desired results.