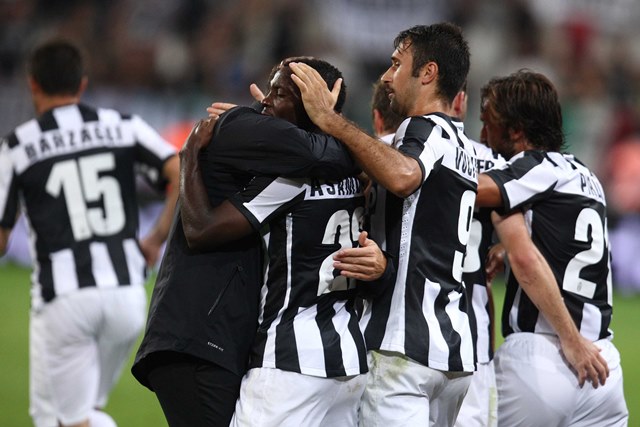 The battle was on. Two top Italian sides AC Milan and Juventus clashed in the Serie A and the Ghanaian interest of the game was relished.

There was no celebration for Sulley Muntari and teammates

Sulley Ali Muntari was given a starting position in the AC Milan squad as was Kwadwo Asamoah for his Juventus side as both Ghanaians went on to play the full game.

Michael Essien however did not make the match-day squad for home side AC Milan.

The fiercely contested game saw a goalless first half with bookings for Juventus players Claudio Marchisio and Angelo Obinze Ogbonna.

Carlo Tevez scored the only goal of the game in the 71 minute to give Kwadwo Asamoah’s Juventus the edge over Sulley Muntari’s AC Milan.

Ghanaian players Sulley Muntari and Kwadwo Asamoah were all booked in the second half of the game.

AC Milan’s 100% start to the new Serie A season under Filipo Inzaghi came to a crushing halt on Saturday evening when they were beaten by champions, Juventus Turin.

It was an all Ghanaian affair at the San Siro in Milan as Sulley Muntari started and lasted all game for Milan, same as Kwadwo Asamoah who maintained his place up field for Juventus who nicked the tough clash 1-0.

Argentine striker, Carlos Tevez’s late strike proved decisive for Juventus who kept up their own 100% start to the 2014/15 season with the victory at their old rivals’ home.

Juventus thereby overtake Milan at the top of the Italian top flight standings whilst Milan fall to 3rd place on goal difference, behind second spot Roma who host Cagliari on Sunday.

A third Ghanaian, Michael Essien who also plays for Milan, missed the clash through injury.