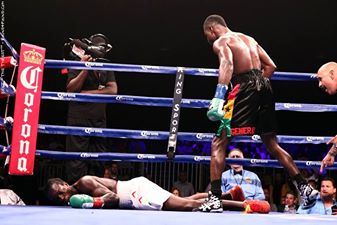 Fredrick Lawson reaffirmed his championship credentials with a straight forward victory against senior compatriot, Ray Narh in a Welterweight contest over ten rounds at the Barker Hangar in Santa Monica, California, USA on Wednesday night.

World title chasing Lawson dropped Narh twice in the 4th and 8th rounds but was taken to the distance for only the third time in 23 career fights as the two Ghanaian pugilists put up a show screened live on ESPN.

Ray Narh gets the count

In the end, Lawson maintained the perfect start to his professional career by claiming a 99-89, 95-93, 99-89 decision on all three scorecards to improve his record to 23-0, 20 KOs whilst condemning the now 36 year old Narh to his fourth straight defeat and a 5th loss in his last 6 fights.

Worldwide and the 25 year old Lawson is not looking back, having sworn to work even harder as he pursues the childhood dream of wearing a world championship belt.

It’s also a new life for the Ghanaian who now trains under the tutelage of renowned Alex Sanchez, the experienced trainer of hard hitting Middleweight world champion, Gennady Golovkin. Lawson has in effect trained and sparred with the unstoppable Golovkin at Sanchez’s The Summit gym in California.

“It was a good fight for Freddy but he knew he was going to win, that’s how high his confidence is. We will be back for bigger things,” a source close to Lawson said after the fight.