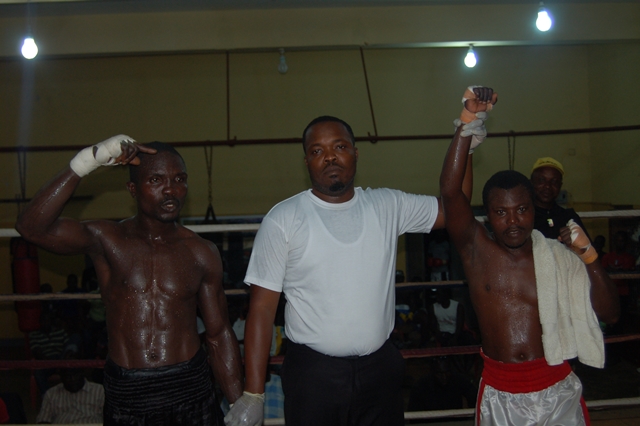 Evergreen Isaac Quaye is a boxing champion at last, the 34 year old finally laid claim to a championship belt last Saturday after dominating compatriot, James Nortey in their scheduled 10-round fight for both the West Africa Boxing Union (WABU) Super Flyweight title.

Quaye who began his professional career way back in November 2003, has challenged for several titles during his 11-year career but the Ghanaian nicknamed Pretty Boy has never been successful.

Twice he fought for the Commonwealth Super Flyweight title, but twice Isaac Quaye came off the wrong end of the result, the latest being just this past March when he lost a unanimous decision to Kevin Satchell in Liverpool, UK.

But not last Saturday, October 11 when he faced Nortey in the headline bout of the All For One Sports Promotions in collaboration with Box Office Sports Promotions bill sanctioned by the Ghana Boxing Authority (GBA) at the Seconds Out Gym in Accra.

Quaye’s international experience proved too strong for Nortey who was pummeled until he couldn’t handle it any longer after 2minutes, 32 seconds of round 7.

“It’s a great day and I call on all my fans to come and join me to celebrate this victory. It’s been a long time waiting but I appreciate the support of my fans who have stuck by my side in bad and good times. Let’s go and party,” an obviously overexcited Quaye said at ringside.

Quaye wasn’t the only one smiling on a night of thrilling and action packed exciting boxing which saw a total of eight bouts. Michael Pappoe also annexed the West Africa Super Featherweight title courtesy a 10 round TKO win against Samuel Danso.

Other winners were Raymond Commey who knocked out Joseph Adu in round 8 of their Super Bantamweight contest scheduled for 10 rounds, Richmond Djarbeng who scored a 5 round TKO over Sarfo Tyson in a Welterweight bout scheduled for 10 rounds whilst Prosper Ankrah claimed a unanimous points win over Raymond Ansah in a Bantamweight clash over 8 rounds.

In other fights, Isaac Aryee defeated Mohammed Tagoe by a round 4 TKO in a Welterweight clash, David Kotey defeated Kumah Doe by a unanimous points decision in an 8-round Super featherweight contest as Daniel Adoku won all 6 rounds on all three scorecards of the Middleweight contest against James Owusu.