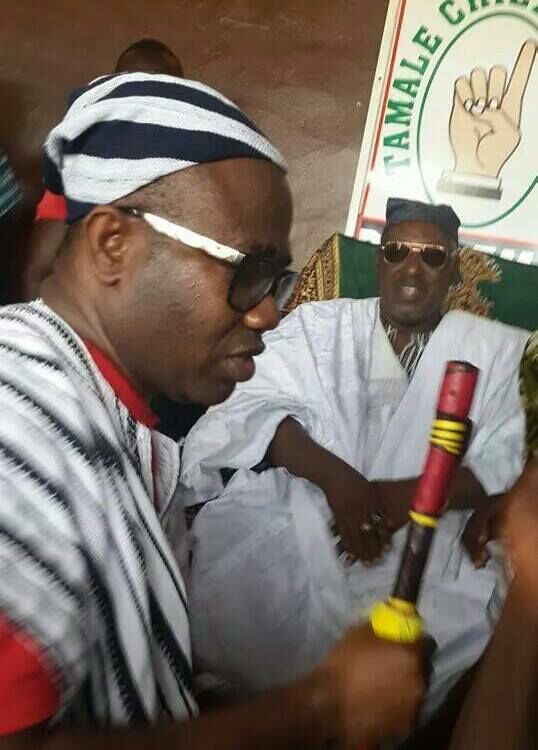 Kwesi Nyantakyi being initiated by the chief of Tamale

The President of Ghana Football Association (GFA), Kwesi Nyantakyi has been enskinned as Chief of Football by the chief of Tamale at a ceremony at the Tamale Palace on Tuesday afternoon.

Kwesi Nyantakyi being initiated by the chief of Tamale

The national team are in Tamale for a first international game when they take on Guinea in a 2015 Africa Cup of Nations qualifier on Wednesday afternoon.

And the people of the Northern Region capital who have welcomed the Black Stars with open arms since their arrival there on Monday have followed up by crowning g the Ghanaian football boss with the huge accolade when players and officials of the Black Stars paid a working visit to the Tamale palace.

Nyantakyi has been recognised for a plethora of achievements at the helm of the administration of the sport in this country for almost a decade, a period during which Ghana qualified for the World Cup for the very first time in 2006, following it up with consecutive qualification for both 2010 and 2014.

Nyantakyi was not the only one to be honoured by the overlord of Tamale as players of the national wear all robed in the local smock clothes, locally called batakari.

The Black Stars are headed for the Tamale Sports Stadium where they will hold a last training session before tomorrow’s game against the Syli Nationale at the same venue.

Ghana lead Morocco 2015 qualifying group E with 5 points, just ahead of Guinea and Uganda who boast four points each with Togo trailing all on 3 points.

Only the top two are guaranteed qualification to the next continental championship billed for the North African country between January 17 and February 8.

After the fourth round of group qualifiers tomorrow, two more games for each team come up in November as the race gets ever fiercer.