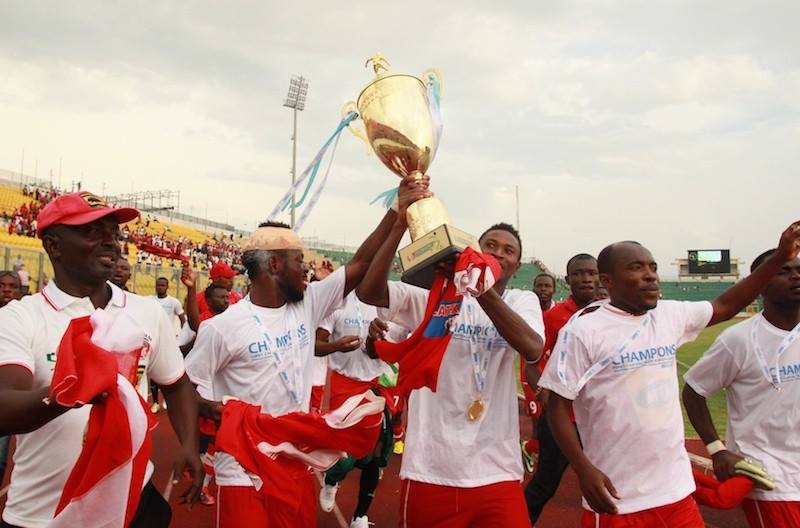 Ghana champions, Asante Kotoko have been positioned at number 34 on the African continent’s clubs’ ranking based on clubs’ performances up to October 19, 2014, according to Footballdatabase.com which has DR Congo giants, TP Mazembe atop the standings.

The rankings rated four hundred and fifteen (415) clubs on the continent with Kotoko’s biggest rivals and also former Africa champions, Hearts of ranked over 50 places below the Kumasi giants at 85th.

Also ranked above Hearts are Ashantigold who are 50th on the continent, Berekum Chelsea (62nd) and Aduana Stars who won the Ghanaian league title in their debut season in 2010 (75th).

Hearts of oak are way below at 85th

Other Ghanaian clubs on the ranking table include Medeama SC who participated in the CAF Confederations Cup for the first time ever this year (110th) as well as Heart of Lions (131), Wa All Stars (139), Liberty Professionals (148) and Ebusua Dwarfs (154) who all represented the country at one time or the other in continental championships, albeit some of them didn’t even kick a ball in Africa.

Kotoko reportedly racked up a total of 1,432 points based on the period used for the rankings having dropped 37 points on their tally from the previous rankings.

Accordingly, the ranking system is similar to the model used in the monthly FIFA/Coca Cola rankings of the world’s national football teams.

Mazembe of course are top followed by Al-Merreikh of Sudan, AS Vita Club of the DR Congo again, Raja Casablanca and Al Hilal of Sudan in that order.