Kamote lands with a vow to stop Ashie in 4 rounds 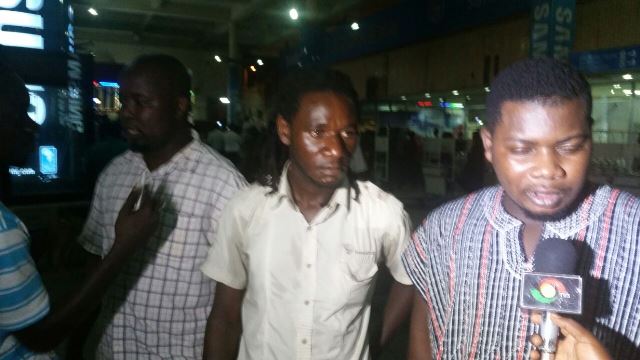 McDon with Allan Kamote when George Ashie's opponent arrived at teh Kotoka International Airport ahead of the December 5, 2014 fight

Kamote on arrival at the Kotoka International Airport

Kamote (25-7-4, 14 KOs) landed at the Kotoka International Airport in Accra on Friday evening along with his trainer full of confidence.

“I am here to win and I am not afraid of the home crowd who I know will all be supporting Ashie,” 32 year old Kamote told media men at the airport.

“I have trained really well for this fight and there is nothing that can prevent me from beating my opponent and win the belt. I will knock him out by round 4,” Kamote swore.

“It’s good to have good boxers face each other, that’s all we are about at McDon Promotions. We promise the fans to come in their numbers because they won’t like to miss the show we expect the two boxers to put up,” Mr. Atitsogbe told Allsports.com.gh.

The Tanzanian is coming off winning the Universal Boxing Organisation (UBO) Lightweight world championship following a unanimous points victory over Osgood Kayuni back on October 5.

He faces Ghanaian George Ashie (24-4-1, 17 KOs), a former Commonwealth Lightweight champion and qualifier for the off-on-off boxing’s WBC World Cup but who hasn’t fought since defeating Michael Odhiambo in Accra in March 2013.

Next Friday, 6 December 2014, Ashie who has vowed to become a world champion before he retires, begins the latest roadmap to realising that dream against the tough Kamote.