Michael Essien sent-off in AC Milan victory in Serie A 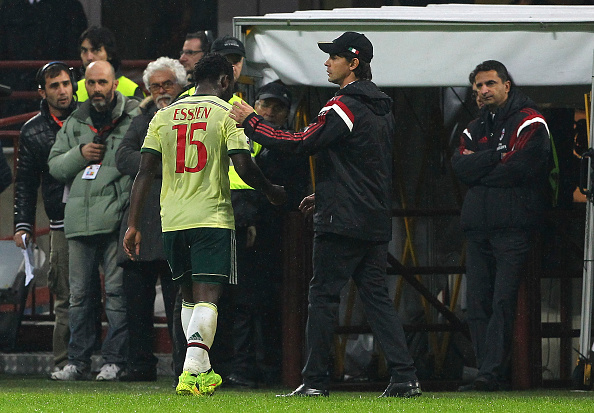 Essien is consoled by AC MIlan coach, Filipo Inzagghi afetr he was sent off

Essien is consoled by AC MIlan coach, Filipo Inzagghi afetr he was sent off

Micheal Essien was shown his marching orders in the Italian Serie A on Sunday when AC Milan entertained Udinese at the San Siro.

The Ghanaian was handed a position in the starting XI, playing on opposite sides with fellow Ghana international Emmanuel Agyemang-Badu who also started for Udinese.

Essien was sent off for a second bookable offence. The Ghanaian received his first yellow card nine minutes into the second half of the game with the red card coming after Michael Essien was penalized for raising an elbow and pushing Udinese’s Marques Lourerio Allan.

Essien appeared quite shocked when he was red carded

Michael Essien’s dismissal leveled the numbers in player count as Udinese had already had a man sent off nine minutes earlier.

Milan secured all three points with a 2-0 home victory. Jeremy Menez and El Shaarawy scored the goals for the home side.

Sulley Muntari did not play a part in the game for his Milan side as the Ghanaian was not named in the match day squad.