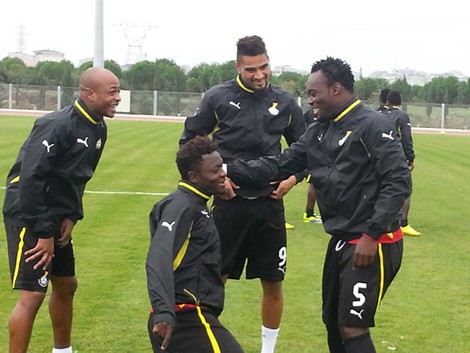 Black Stars coach Avram Grant has given the strongest indication that the doors are still opened to welcome suspended Black Stars trio Kevin-Prince Boateng, Sulley Muntari and Michael Essien back into the team.

Muntari and Boateng were banned from the Ghana national team for engaging in acts of indiscipline during the 2014 World Cup.

Muntari who plays for AC Milan physically abused a high ranking Ghana FA official while Boateng has been punished for allegedly insulting the coach.

Muntari has since refused to comment on the altercation.

Kevin-Prince Boateng on the other hand has said a lot to the German press throwing allegations at Ghana FA officials and the coach to primarily claim innocence.

The GFA meanwhile placed an indefinite suspension on the duo who were sacked from the Ghana camp hours before facing Portugal in the final group match at the World Cup.

With some growing muted calls for the return of the influential trio, Grant says they will be considered if they are ready to sacrifice for the team.

“The door is open for every player to join the team, Grant said.

“But they need to show that they [Kevin-Prince Boateng, Sulley Muntari and Michael Essien] want to come and they must sacrifice to the national team.”

“We all need to support the national team. It’s very important to help the team with our all so the team can go forward. It they are willing to sacrifice for the team, the door is still open.”