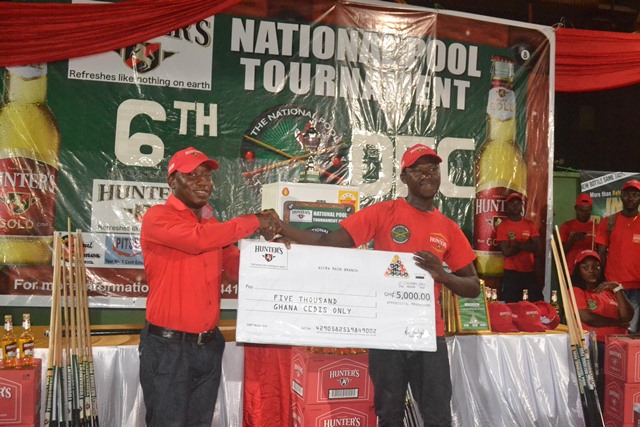 Abdul Muqeet stood tallest as the 2014 National Pool Tournament came to a grounding and thrilling finale in Accra on Saturday evening.

Muqeet who made it to the national finals after winning one of the qualifying events at Pasarro in Kumasi, was at his ball breaking best at the Accra Sports Stadium as he defeated everyone including Nigerian, Daniel Promise in the final to emerge this year’s Ghana pool champion.

“It’s the game of my life and I believe I deserve to win this competition, I’m so delighted today and I thank God for this honour. I can’t wait to defend my title next year,” an overly elated Abdul Muqeet said in the excitement of his triumph before taking the dance floor to drown himself in joy.

In the event, Muqeet also became the first Ghanaian to win the competition in its five year span, something that has excited the Hunter’s Gold sponsors, Distell Ghana Ltd.

“I think this year’s tournament has been an improvement on last year’s, and  had a lot more participation in terms of players and because we run this Hunt-the-gold promotion , there was a lot more female participation,” said Jude Matti, Brands Manager of Hunter’s Gold drink

“It’s also special because for the first time in five years, we finally got a Ghanaian winner which is good to move the brand Hunter’s and the sport forward in Ghana,” Mr. Matti told Allsports.com.gh.

from the 44 qualifying centres of last year to a projected 64 but which eventually whittled down to 60 qualifiers across this country since the competition broke balls in Accra on August 1.

Though Abdul Muqeet prevented another Nigerian triumph, 2nd, 3rd and 4th places all went to players who hail from the West African neighbouring country with another Ghanaian completing the top 5.

He was followed in third place by the hitherto defending champion, Shehu Bamidele who defeated fellow Nigerian, Victor Myers in the match for 3rd and 4th spot.

In the end, the sponsors could not help but hail another highly successful year of playing Ghana’s premier pool competition and are already looking forward to the tournament’s return next year.

“It’s a great competition, we enjoyed a fantastic relationship with the organisers and also directly meeting and interacting with our target consumer group of young adults between 18 and 30 years. We’ve seen

increase in sales, consumption and top-of-mind awareness of the brand, ” Hunter’s Gold Brands Manager. Jude Matti reflected on the 2014 tournament.

“It’s certainly going to be bigger and better next year and because we had a Ghanaian winner this year maybe when the invitation comes from Uganda again by February (2015), we could consider it,” Mr. Matti pledged.