Ghanaian duo Helegbe and Teyehugmeh score for AS Tripoli in Lebanon 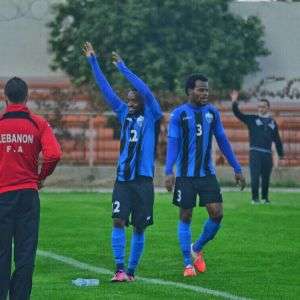 Ghanaian duo, Michael Helegbe and Emmanuel Teyehugmeh were on target in AS Tripoli’s 2-1 home win against Al Akhtaa Al Ahli on Sunday in the Lebanese top-flight.The Ghanaian trio in AS Tripoli set-up were handed a starting spot as the home side went into the game from the backdrop of their last week’s 6-0 home win over Racing club.In the game it was Emmanuel Teyehugmeh who scored his debut goal for AS Tripoli in the 29th minute after he headed home Michael Helegbe’s corner-kick. But the away side equalised during the course of the game.However, 9 minutes to full time the most dangerous player in the Lebanese top-flight, Michael Helegbe scored his 13th league goal in the ongoing campaign as his side won the day by 2 goals to 1.

AS Tripoli sits 4 on the league table with 19 points after 10 matches.The Ghanaian trio – Michael Helegbe, Emmanuel Teyehugmeh and Douglas Nkrumah played the entire duration of the game.