Tagoe warns Ashie: 'I will beat you again' 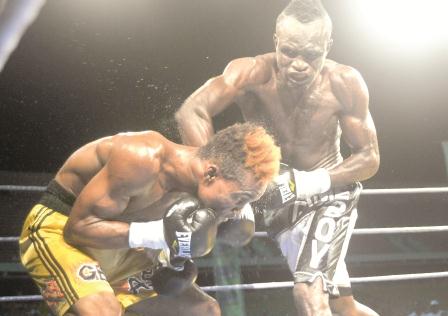 Emmanuel ‘Game Boy’ Tagoe, the boxer managed and promoted by Black Stars captain, Asamoah Gyan says he is king of the ring in this country and is willing to offer rematches to any of his previous 22 victims especially George ‘Red Tiger’ Ashie.

Tagoe goes into battle for the WBO Intercontinental Lightweight championship against Tanzanian, Sadiki Momba on December 26 but took time off to send a warning to his critics, daring other boxers in his weight category to come face him in the ring if they still question his credentials.

Topmost on Game Boy’s hit list is George Ashie, the local rival he defeated on unanimous points in their overly publicised clash two years ago.

“I am king of the ring and I have proven it by beating everybody in Ghana, all those who want a rematch like George Ashie must train hard and I will grant him one if his managers give him the go-ahead. And I will beat him again to settle the scores once and for all,” Tagoe hit his chest out on national television when he appeared on Ghana Television’s ‘Stage Africa’ show on Friday morning.

“I am the best and people don’t understand my confidence when I fight but I believe in myself. I am fighting for Ghanaians and determined to win a world title for the country so I want my people to keep praying for me and surely I will bring the world title,” Game Boy added.

Tagoe has not fought since beating American, Geraldo Robles in his first fight in the USA back in July last year but his trainer and uncle, Emmanuel Tagoe AKA Coach Akese has rubbished any talk of ring rustiness ahead of the clash against Momba at the Accra Sports Stadium on Boxing Day.

“It’s been a year and four months now but he has always been having good training and is fresh and ever ready. I know he can do it for Ghana so we want to use this fight to show Ghanaians that he is the next world champion. Game Boy is very good and I believe in him,” Coach Tagoe said.

The bill codenamed ‘Who rules the ring?’ is also the first BabyJet Promotions event of the year and aside a promise that Asamoah Gyan will personally also be in Tagoe’s corner for the fight against Momba, a host of Ghana’s top musician friends of the part-time musician (Gyan) will also be in attendance to thrill fight fans during bout intervals.

“The significant thing about this promotion is that we have Emmanuel Tagoe, the boxer with the best chance of becoming a world champion as the top attraction,” said Jeffery Asare, BabyJet Promotions spokesman.

“This is a bout to prepare him for the world title and also to showcase to Ghanaians the next big thing in boxing as well as also offer entertainment at Christmas. There can be no better place to be on December 26 than at the Accra Sports Stadium,” Mr. Asare added.