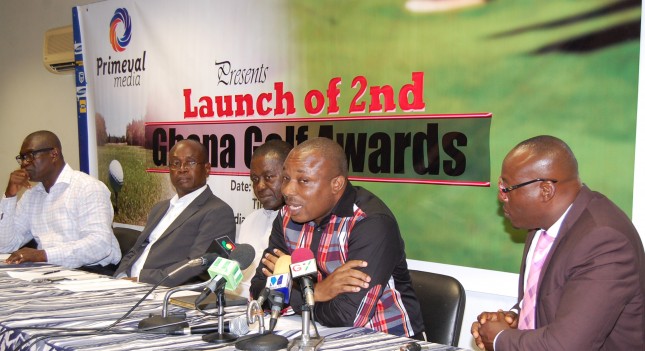 13 awards have been put at stake for grabs by golfers at this year’s 2nd Ghana Golf Awards slated for the International Trade Fair Centre on Saturday 27th December, 2014.

At a Press briefing on the ceremony, Mr. Mike Aggrey, Vice President of the Ghana Golf Association (GGA) said this year’s event would be an improvement of the first one held at the same venue.
He noted that many corporate bodies have expressed interest in partnering the Ghana Golf Awards and this year Guinness will introduce a new drink at the ceremony which is strictly by invitation.

Group Captain (rtd) Gyimah Kwakye Secretary of the (GGA) invited the media to be present at the event and show more interest in reporting on Golf, which he said was not an elite sport as some people believed.

Jeffery Asare Communications Director of PrimeVal Consult, organisers of the event hinted that the Okyenhene Amoatia Ofori Payin II will grace the programme as Special Guest of Honour, with Sir Sam Jonah chairing the ceremony.

He announced that the Pace Setters Band of GBA will provide entertainment alongside the Die Hard Supporters Union who are known to support all sporting disciplines in Ghana.

The Communications Director named some of the sponsors of the ceremony as Unibank, Airtel, Coca Cola, CAL Bank, Azar Paints and LG. Others are Jandel, Special Ice Water, Latex Foam and Guinness.
Credit: Sammy Heywood Okine