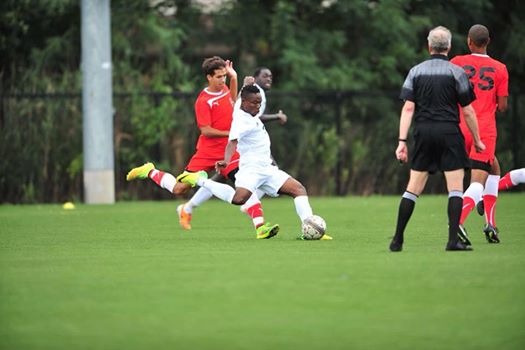 Young talented footballer, Jonathan Mensah also known as Tesco has a great ambition just to don the national colours of his country and play for the Black Stars in future.

The United States based student footballer who has been very sensational this season with his determination for success says after graduation he wants to play football before doing business administration which he studied at the Felician University in America.

He loves to train very hard so he is never a lazy player and loves goals, so he is always on the offensive. Mensah plays every position in defence and he is never afraid to tackle players with big names often termed as stars.

Jonathan Mensah was a member of the Mamprobi Rising Stars in Ghana and he was one of the potential rising stars with a great future. He was very disciplined and determined to succeed in whatever he does. It is therefore not strange that he has been able to go to school and about to graduate with a Bachelor’s Degree in Business Administration.

He told yours truly that life is what one makes it and he is never sad of going to the United States and learning to become a graduate.

Mensah who bears the same name with a Black Stars defender who featured at the 2014 FIFA World Cup said he is better,  and wants to be given the chance to prove himself.

At the moment, he is preparing for his graduation and training hard to secure a deal in Europe, Asia or any African nation with a good league, like South Africa, Egypt or Morocco.