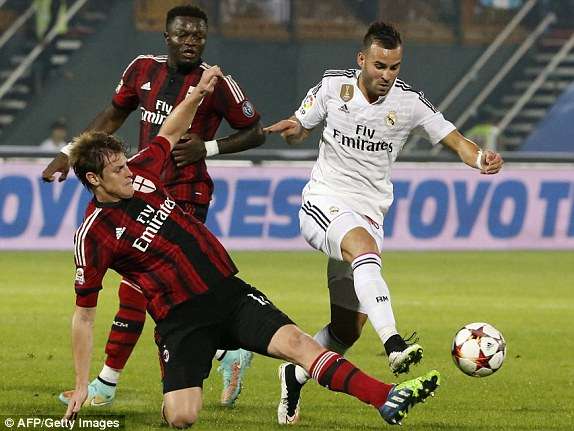 Sulley Ali Muntari was in football action on Tuesday for his Italian club AC Milan despite the winter break for the Italian Serie A.

The Ghanaian and his international team-mate Michael Essien were named in the squad for AC Milan against UEFA Champions League and World Club Cup Champions Real Madrid in a mouthwatering friendly.

Muntari and his Milan side immerged winners in the clash between the European giants as they beat the Spanish club in the six-goal thriller.

Jeremy Menez pounced on a poor back pass from Nacho to give AC Milan the lead in the game.

Stephan El Shaarawy put Milan 2-0 up before World Player of the Year Cristiano Ronaldo pulled one back for Real Madrid.

El Shaarawy grabbed his brace after the first half interval to give Milan their two-goal advantage again before substitute Giampaolo Pazzini made it 4-1 in favour of the Italian club.

Karim Benzema pulled on back from the penalty spot late on in the game with AC Milan running away with a 4-2 victory.

Sulley Muntari was replaced by Hachim Mastour in the 76 minute of the game with Michael Essien not getting a chance from the substitute bench.

Real Madrid went into the game with a 22 straight wins from games in all competition. Milan ended the record despite the game being a friendly.