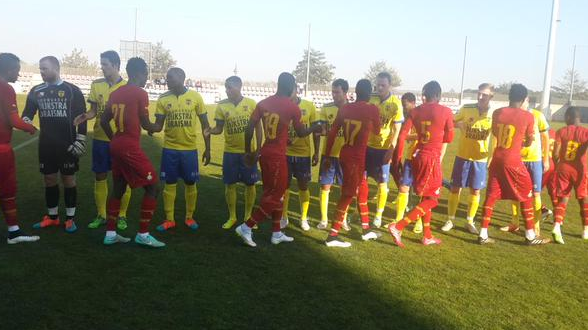 An Andre Ayew goal saved the blushes of the Black Stars as they drew 1-1 with Dutch side SC Cambuur in another pre AFCON 2015 friendly.

Ghana playing a new 3-5-2 formation under Grant started the game slowly wit the more cohesive Dutch unit dictating the game from the onset.

It was no surprsie when former Blackburn Rovers midfielder Daniel de Ridder gave Cambuur the lead as early as the 16th minute.

The goal gave life to the Black Stars who started mounting pressure on the Dutch side’s goal but to no avail.

Grant stuck with the same team that started the game as the second half resumed with Asamoah Gyan getting close to an equaliser on a number of occasion.

Both sides searched for the winner amidst a raft of changes with Grant switching tactics again in the later part of the game.

Ghana will play it’s last friendly game against German side Freiburg before departing to Equatorial Guinea for it’s AFCON group c opener against Senegal on the 19th.