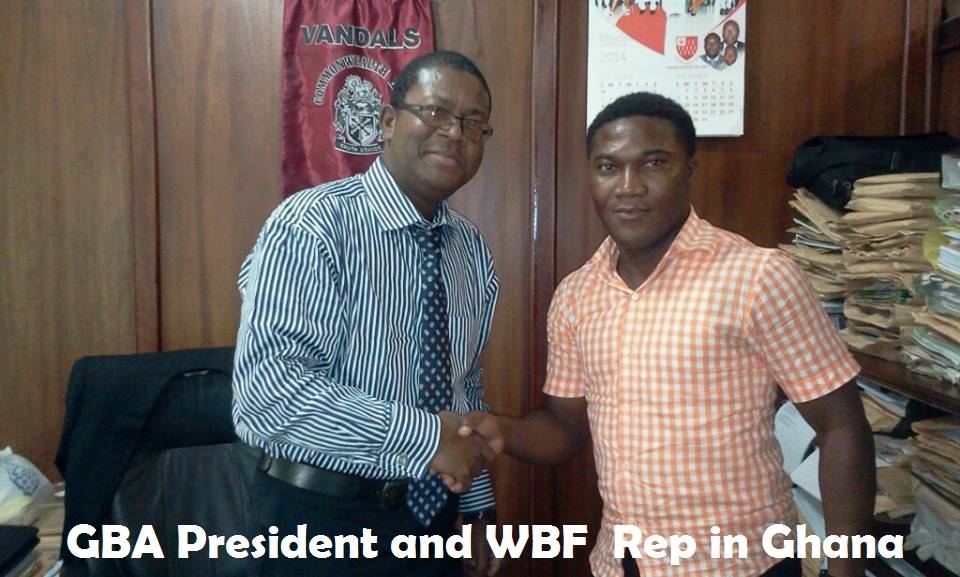 Peter Zwennes, President of the Ghana Boxing Authority (GBA) has commended John Oppong Welbeck for his efforts to support boxers in Ghana and place Ghana in the top ranks of the World Boxing Federation (WBF).

The GBA President who welcomed Welbeck to his office in Accra said the WBF is another opportunity for Ghanaian boxers to be rated in the world and attract big championship bouts.

According to Peter Zwennes, the WBF is an avenue to rate Ghanaian boxers and prepare them to international recognition and fame. He urged John Welbeck and his associates to work hard to give Ghana more world champions in the year.

John Oppong  Welbeck who is domiciled in the Republic of South Africa for the past six years and had been working as a sports consultant and coach in football and boxing said Ghana has great potentials, and after watching the Boxing Day Bonanza that featured the likes of Emmanuel Tagoe and Michael Annor, he was highly impressed with their performance and believes Ghana can produce more world beaters.

He called on the media to propagate Ghana’s sports messages in a positive way for the corporate world to identify the reason to sponsor or support boxing.

“Ghana has the men to rule the world again. I believed in Azumah Nelson and I can say he is the best, but there are others like Emmanuel Tagoe who has the potential of becoming a world champion and he must be supported,” John Welbeck said.

John Welbeck also took the opportunity to task Ghanaian boxers to be disciplined and the sky would be the limit.

“I have been touring the various clubs and gyms in Accra and I can say the boxers are training very well. My problem is with coaching as there are only a handful of qualified boxing coaches who can train the boxers very well. We at the WBF are trying very hard to organize a course for officials and soon we shall do one for coaches and trainers. I hope to get in touch with some experts in South Africa, Europe and America to help the local coaches,” he said.

Meanwhile, the WBF seminar for boxing officials in Ghana has been slated for February and about 15 referee/ judges are expected to attend to refresh their skills.