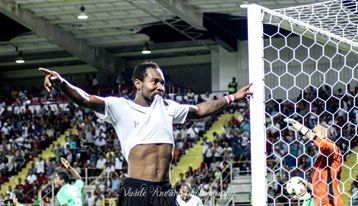 Sadat Bukari’s hot goal soring form for Astra Giurgiu in Romania has caught the eye of some of Europe’s top clubs and keen to cash in on the mercurial Ghanaian striker is Ukraine side, Metalist Kharkov.

Allsports.com.gh can exclusively reveal that Metalist who recorded a disastrous UEFA Europa League campaign earlier this season and are languishing in 7th spot on the 14-team Ukraine Premier League table have tabled a 400,000 Euros bid for Sadat Bukari in a bid to solve their goal scoring problems.

Metalist who albeit have two games in hand over the other clubs in the Ukraine Premier League are so keen on acquiring the Ghanaian striker to push their pursuit of European football come end of season, they have even offered to increase the bid to entice Bukari.

Accordingly, the 25-year-old Sadat who has netted five goals in ten Romania Liga I games and also hit two strikes in Astra’s failed UEFA Europa League campaign, has been of interest to Metalist who are hopeful of landing the striker for Igor Rahaeva’s team.

“Yes I can confirm that I have received an offer from Metalist,” Sadat Bukari confessed to Allsports.com.gh exclusively.

“I and my agent will decide next week,” he added.

If it the deal does go through, it will be a move to another country for the vastly travelled former Heart of Lions and Ghana junior international who has also had stints in Tunisia and Israel before joining Astra in Romania at the beginning of the 2012/13 season.