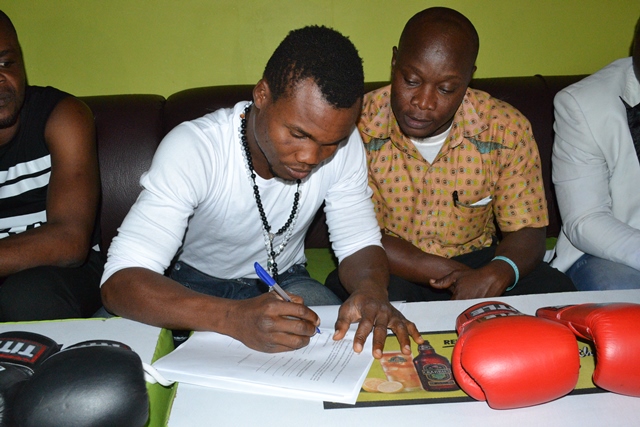 Boxer George Ashie’s quest to realise the childhood dream of becoming a world champion has received a huge boost following the signing of a 3-year management deal with Reinsport Management headed by Abraham Rendorf AKA Teddy Moore.

Ashie who only in December defeated Tanzania’s Allan Kamote to annex the WBO Africa Interim Lighweight title, has inked a deal exclusively for three (3) years subject to renewal for a further two (2) years based on the boxer’s performance.

And Ashie, fondly nicknamed Red Tiger (25-4-1, 18 KOs) is brimming with excitement after putting pen to paper during a short but impressive ceremony at Asia Gardens Restaurant at Dansoman which shares the same address with ace international boxing Referee/ Judge, Ataa Eddie Pappoe.

“This is a great day, a dream come true. Like the way you see Emmanuel Tagoe (Game Boy), how Asamoah Gyan is pushing him, that’s just what I need. I’ve wanted somebody like that to push me in boxing and now I got it so everything will be fine,” Ashie toldAllsports.com.gh exclusively.

“The determination to be world champion remains and this time my manager will push me with all the support I need. I want to promise all Ghanaians that I will bring the world title to make everybody proud so they should just keep on praying for me,” Ashie added.

The boxer gets straight into action under the new management when he defends his WBO Africa Interim Lightweight belt in Accra on 6 March.

On his part, Abraham Reindorf, CEO of Reinsport Management expressed his own excitement at sealing the contract with the boxer he rates as the best in this country and is pledging unflinching support and belief in pushing for a world title shot for George Ashie.

” I believe in the potential of George to get to the very top of world boxing and I’m willing to assist him achieve that,” Mr. Reindorf toldAllsports.com.gh after signing the 3-year deal.

“I believe he can become world champion this year so I will work with the promoter to work things out and we will work hard to get us to that world championship. I am ready to do anything for him to reach the top,” Teddy Moore said.