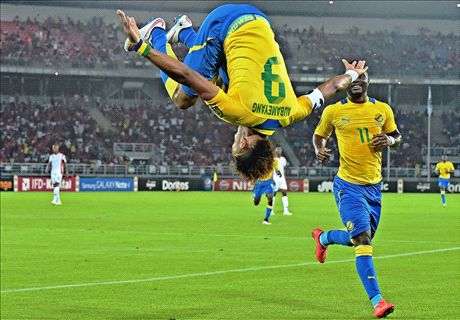 It was a night to remember as Gabon open their Afcon campaign with a 2-0 win over Burkina Faso.

Star-striker Pierre Emerick Aubumeyang made no mistake when he was presented an opportunity after a mix up between Kone and Sandou in the box. The Borussia Dortmund striker superbly hit the roof of the net with aplomb.

There was nothing separating both sides after quarter of an hour. Burkina Faso came close to opening the scoring on the 11th minute through Chelsea’s youngster Betrand Traoré, but Ovono was up to the task as he parried the ball away.

But Gabon stayed put and were a whisker away from extending lead through Ndong, but his effort went inches wide on the half hour mark.

At the other end, Burkina Faso appealed for a penalty after Zongo was brought down in the box, but the referee had none of that.

Burkina’s hard work almost paid dividends on six minutes past half an hour when Pitroipa had only Ovono to beat in the six yard box, but the keeper did well to keep his side in the lead before half time.

The Stallions came out more purposefully early in the second half to get themselves back in the game, but Gabon prove too strong to be pegged back.

Their counter attacking play spearheaded by star-man Aubameyang was too quick for Burkina’s back line to contend with. The Panthers came close twice to extend the lead through Aubameyang and Malick Evouna, but both could not make the opportunities presented them count as Sandou was up to the task.

With barely quarter to the end proceedings, Gabon finally gave themselves breathtaking goal. Great attack was initiated by skipper Aubameyang and it was capped off beautifully with a sublime header from Malick Evouna.

Artisede Bance almost got a consolation goal for Burkina Faso with powerful drive from about 30-yards with a fantastic hit, but it went over the bar.

In the dying embers of the game, Burkina Faso’s misery was almost compounded, but great diving save by Sandou prevented from nearly a demolition. And George Costa men won their first game of the tournament.