Fiamenyo scores to give Hearts win in League opener 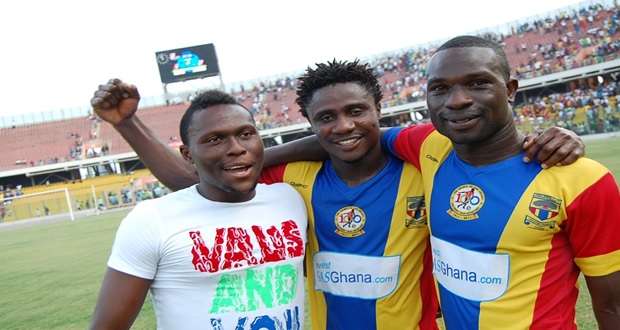 Accra Hearts of Oak opened their 2014/15 FCP Premier League with a hard fought 1-0 win over newly promoted side West Africa Football Academy(WAFA) at home in Kpando on Saturday due to their ban.The Phobians started the game with three new recruits (Leonard Tawiah, Isaac Oduro and Kwame Kizito) in the starting eleven while WAFA fielded no new signings.The capital based club adapted the 4:4:2 system with Kwame Kizito and Gilbert Fiamenyo spearing the attack for the Phobians with WAFA picking the 4:5:1 system with Samuel Tetteh being their leading marksman with support from Zakariah Mumuni.Hearts of Oak dominated play from onset with WAFA finding no answers to the telepathic play of the Phobians as goalkeeper Theophilus Jackson who was in post for the newly promoted side prevented the Hearts from scoring. However, the Phobians nearly got the opener in the 25 minute but Gilbert Fiamenyo failed in connecting a wonderful cross from Owusu Bempah.WAFA then announced their presence on the half hour mark with Zakariah Mumuni exposing Hearts of Oak left-back Isaac Oduro with his pace. But Samuel Tetteh’s inexperience showed on the field of play with a lot of misfiring shots in the Hearts of Oak goal area as the first half ended goalless.Back from recess, the Phobians looked the most determined side by instituting a lot of scintillating attack but the last man in defense for WAFA goalkeeper, Theophilus Kept his side in the game, WAFA on the other hand turned the heat on the Phobians but the central defensive pair of Abraziz Abaknkwa and Kwaku Andoh kept the attacking line of WAFA at bay.But in the 57th minute burly striker Gilbert Fiamenyo gate crashed WAFA’s defense to hit the ball pass Theophilus Jackon to register the first 2014/15 league season goal for the Phobians, 2 minutes later Hearts of Oak nearly made it two but Kwame Kizito shot went wayward.WAFA made some tactical substitutions which started having positive effect on their play by pitching camp at the Phobians goal area but Tetteh Lugard was at his best in saving the situation for the home side.The Phobians then adapted the defensive system by not pushing men forward as they protected their solitary goal till the game came to an end with the capital based club picking their first 3 points of the season thanks to Gilbert Fiamenyo’s strike.