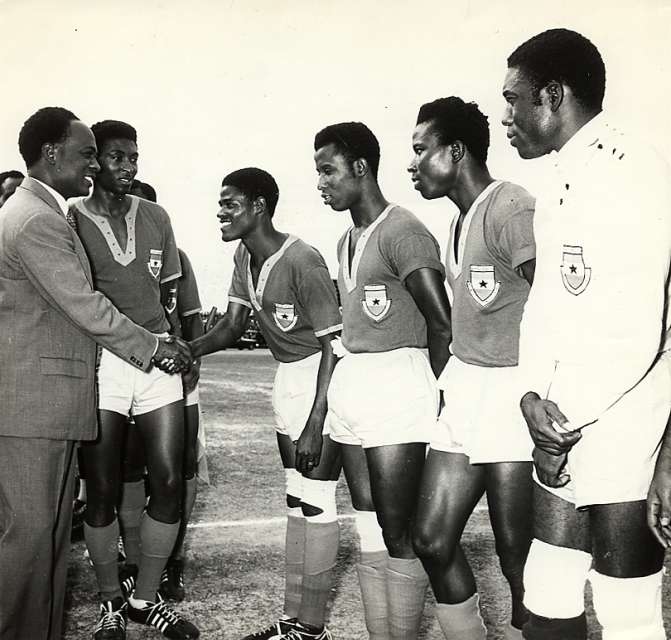 Osagyefo Dr. Kwame Nkrumah, in habitual fashion, greets the Black Stars at the Accra Sports Stadium just before the start of an international game in 1962

Osagyefo Dr. Kwame Nkrumah, in habitual fashion, greets the Black Stars at the Accra Sports Stadium just before the start of an international game in 1962

The first President of Ghana, Dr Kwame Nkrumah was honoured with a Platinum award at the recently held 2014 Glo-CAF Awards in Lagos, recalling his unmatched contributions to the development of football in Ghana and the African continent during his lifetime.

In a post-event statement issued by Globacom, sponsors of the annual football awards, Ghana’s first President was eulogised for his visionary steps in building the requisite human and institutional capacity which made Ghana a veritable football powerhouse on the continent within just a few years after its independence in 1957.
Dr. Nkrumah held sports, especially football, in high esteem and successfully applied it as a potent tool for national identity and also for marketing his pan-African vision.

In 1964, Osagyefo donated money to put up the Osagyefo Cup which was used to launch the African Clubs Championship, charging the then Confederation of African Football (CAF) to organize an enviable African version of the European Cup for club championship with that trophy.

At home in Ghana, Dr. Nkrumah personally supervised the building of a formidable national team, the Black Stars, which won the Africa Cup of Nations in 1963 and 1965 and also founded the Ghana Academicals, which was an assembly of the best young talents in the country.

“We are happy to be identified with this man of vision whose steps helped to produce a football super power in Ghana in so few years after the country became independent”, the statement said.
“Dr. Nkrumah was an ardent sports enthusiast who promoted football as a sport in his country and on the African continent. As early as 1960, Ghana already had two world class football stadia in Accra and Kumasi and this was responsible in part, for the good showing of Ghana in football on the continent both at the club and national levels”.
The statement said that Globacom draws inspiration from leaders like Nkrumah, who was a shining star across many fronts, including his efforts in uniting Africa through the formation of the Organisation of African Unity (OAU).
“It is the aggregation of his contributions to humanity that make him a leader to remember and a leader to honour and we are happy that the Confederation of African Football (CAF) noticed this and presented the award,” the statement added.