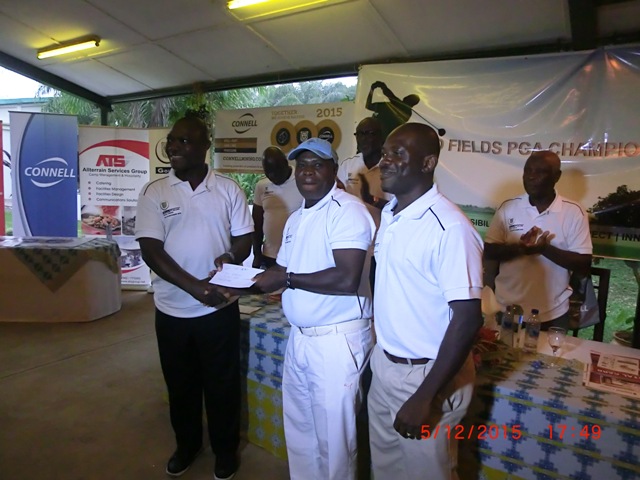 His win was received with happiness as he was the last Ghanaian standing to prevent Nigeria’s Sunday Odegha from wining the competition after dominating for the first three days.

Korblah, famously nicknamed ‘Landlord’ overtook Odegha on the final day with a total score of 286 and took home a cash prize of GH₵25,000 while Odegha followed with a score of 288.

Defending champion Vincent Torgah unfortunately had a bad year as he could not finish in the first three of the winners but however managed to finish fifth with a total score of 290.

The third place position was occupied by Kojo Barnie and vice-captain of PGA of Ghana, Stephen Klah who were tied with 289.

One of the runners-up to Korblah also receives his prize

The other golfers who made the 24 cut in other of merit after the sixth position were; David Doe, Victor Brave Mensah, Emmanuel Osei, Chichi Jackson and Theophilus Govinious.

The last two days of the tournament also had amateur golfers vying for honors.

In the men’s Group A, D. Odum emerged winner with 68 points followed by W. Tawiah with 67 points, S. Gyasi with 64 points while Ghartey placed fourth with 60 points.

J. Coates with a score of 64 points came first in the men’s Group B and was followed by Michael Acheampong with 52 points and T. Mushi with 51 points and D. Atuwo placed fourth with 49 points.

President of PGA of Ghana, Mr Bliss B. K. Ayivor commended the golfers for comporting themselves and also thanked the sponsors for coming on board to support them.