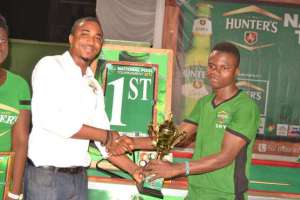 Nudzor Agbanu CEO of Afrodigital Promotions and organiser of the annual National Pool Tournament has urged the media to promote and support the Pool sport also called Snooker Game..
Speaking at the 2015 finals of the National Pool Tournament sponsored by Hunters Cider, at the Accra Sport Stadium, Agbanu also known as Kandyman said the media has a major role to play in supporting the lesser known sports.
According to Kandy the Pool Game has many benefits as it allows one to concentrate and come out with the best. It is also attractive with no dirt on the players and creates a large avenue for socialising and friendship.

Alexander Oppong won this year’s edition. He carried home a pool board, trophy and other prizes from the sponsor.
The second place got a flat screen TV,l  and the third took home a fridge. All the participants got certificates and souvenirs from the sponsor.
An exciting none scoring match featured two ladies, Ruth Annan and Blessing Evelyn to prove that both sexes play the Snooker Pool Game and it is time that many people state playing.