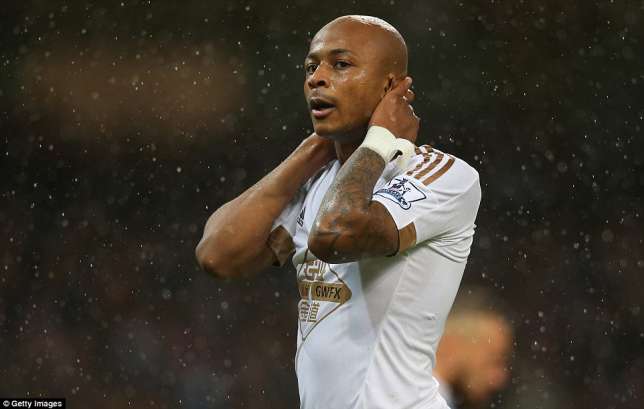 Black Stars vice-captain and Swansea City player Andre Ayew reflected on what had been a difficult week after his side’s loss at the Etihad Stadium in the English Premier League.

The Ghanaian saw the manager who signed his for Swansea City get sacked in the week before losing out to Yaya Toure for the 2015 BBC African Football Player of the Year.

Ayew and his side travelled to play Manchester City in the Premier League where the former Olympique Marseille player and his side were denies everything in the game after coming so close against Yaya Toure’s team.

“We are very disappointed because we could have gone home with at least a point.
“We showed character and a lot of good things, but at the moment the most important thing is the points.
“But hopefully we can take the good things that we did today and use it for the next few games in front of us.

“It’s been a difficult week with Garry’s departure, because he had been at the club for so long and done so much for the club.
“We’re trying to move forward and get the results we need, and hopefully we can get out of this situation.
“City had more possession, but we had clear chances. We showed we can be very dangerous, but what is important is that you take your chances.”

Andre Ayew and his Swansea City team mates have now not won a game in 13 top flight matches, a record that saw Gary Monk get sacked. The team are now searching for his replacement with Brendan Rodgers and David Moyes in the frame to take over at the Liberty Stadium.