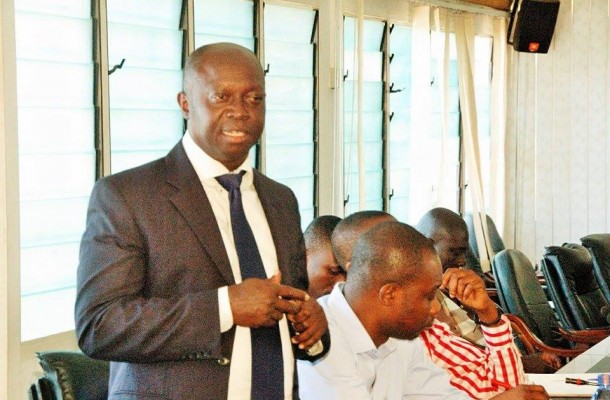 The President of the Sports Writers Association of Ghana (SWAG) Kwabena Yeboah has urged officials players of Taekwondo in Ghana not to relax or rest after the successful two day Korea Cup tournament at the Accra Sports Stadium, but to train harder and prepare for bigger and international events.
He commended the Korean Embassy for sponsoring the two day event which saw the naming of the winners of the innovative video contest.
HE Woon-Ki Lyeo the Korean Ambassador to Ghana congratulated the winners of the keenly contested competition which attracted participants from other regions like the central Region and the Brong Ahafo region. He said it was a privilege to sponsor the sport.

Fred Lartey Otu, President of the Ghana Taekwondo Federation said he was very happy with the standard and level of the players as well as the presence of the President of SWAG, Kwabena Yeboah.
Among the participants were the disabled athletes who displayed wonderfully and got applause from the spectators and fans of Taekwondo.
Champion player and Ghana’s Ambassador of Taekwondo Sharon Akwei was adjudged the best player. Other who excelled and were rewarded with hampers and certificates were Benson Addo fro Oso who fought marvelously with his legs, Augustus Agbozo, and Eunice Adodapo.
The players of the sport expressed satisfaction and joy after the event.
General Secretary of the Ghana Taekwondo Federation, Charles Amofah thanked the Press who covered the event and said that is the way forward if the lesser known sports are to become popular. He called for more media interaction with the disciplines.
Rana Motors were sponsors of the “I Love Taekwiondo” Tournament.
The opening day was graced by many Presidents of Sports Federations in Ghana and all of them appreciated the efforts of sponsorship in sports.
By Sammy Heywood Okine