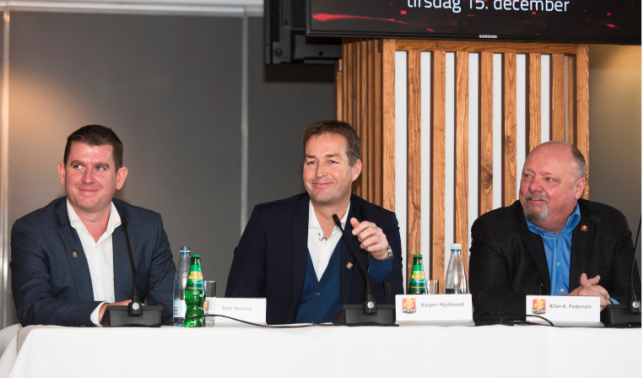 Tom Vernon and others at Nordsjaelland unveiling

Founder of the Right to Dream academy, Tom Vernon has taken over Danish club FC Nordsjaelland.

The Pathway Group which Tom Vernon is the director bought the FC Nordsjaelland after Vice-president Allan K. Pedersen put it up for sale.

Mr. Vernon will be the new chairman of the Danish club starting January 1, 2016 with Allan K. Pedersen continuing his role as vice-president.

Tom Vernon said after the takeover:

“FC Nordsjælland is a club with a strong culture that is rooted in a desire to develop young talent.

“It has the club and the Football Cooperation Zealand (FSN) made by building one of the best talent academies in Scandinavia.

“We see the acquisition of FCN as a unique opportunity to create a partnership between academia from a long-term strategy, which aims to develop some of the best players and thereby reinforce FC Nordsjælland.”

FC Nordsjaelland will also have a new head coach at the start of next year. Kasper Hjulmand will take over first team duties with Olafur Kristjansson and Peter Feher saying goodbye to the Danish club.

Vernon said of the new coach:

“Kasper is one of the best coaches I’ve met, and he is a skilled talent develops.

“His results speak for themselves, and Kasper will be someone important in creating results both in the short term but also in the long term.”