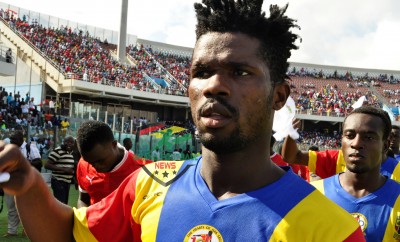 Accra Hearts of Oak are likely to lose the services of their captain Robin Gnagne ahead of the 2015/16 football season.

According to footballcrusader.com sources in Libya with the team, officials of Al Ahly Tripoli are bent on signing the dependable and intelligent Ivorian defender who won the man of the match in their 3-0 international friendly loss on Tuesday.

The player who joined Hearts of Oak from Red Bull Academy has been outstanding over the years an action that saw him win the captain’s armband ahead of his other senior colleagues.

According to our sources, the head coach of Al Ahly Tripoli has been keeping tabs on the player for some time now and is reported to have requested for his signing from the Club President.

Al Ahly officials are said to be working round the clock to ensure that they sign Gnagne before the team leaves for Ghana on Saturday.

The coach is said to have personally made his intentions known to the Hearts of Oak General Manager soon after the team landed in Tripoli.

It is however, unknown whether the Phobians, who are at the rebuilding phase will allow their prized possession to go.

“They are ready to pay anything that will be demanded by Hearts and that could be considered. But for now, they haven’t decided yet because we still have a few more days to spend here. So let’s see what happens”, our sources mentioned.