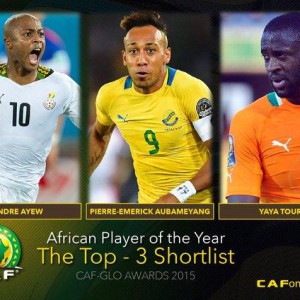 The top three contenders for the 2015 African Player of the Year have been revealed.

The trio was unveiled at a press conference attended by CAF Excutive member Anjorin Moucharafou and Glo representatives on Monday, 14 December 2015 in Abuja, Nigeria.

The winner to be decided by votes from Head Coaches or Technical Directors of the National Associations affiliated to CAF ‎will be announced at the Glo-CAF Awards Gala on 7 January 2016.