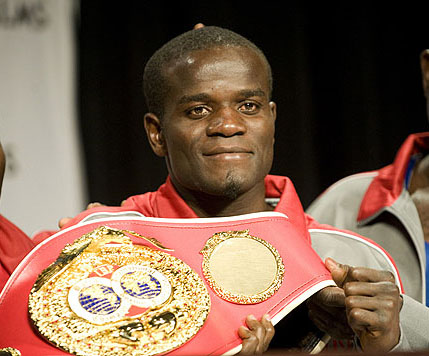 Ghana’s former International Boxing Federation (IBF) Welterweight champion Joshua Clottey says he is armed to the teeth for his clash with Gabe Rosado in their 158-pound catchweight bout at the Turning Stone Resort Casino in Verona, New York on Saturday.

He stated on telephone that his close to a week’s acclimatization in the USA ahead of the fight had added some bite to his preparation. The hard-hitting boxer ((39-4, 22 KOs) left Accra last week with a well-sculpted body-frame, confident of a victory which would put his world title dream on track. Clottey, 38, admitted the enormity of Saturday’s clash, but said his level of preparation for the bout would certainly be his trump card. “I am more than ready for the fight. It won’t be an easy fight but I will sail through. “The fact that winning the bout will enhance my world title dream closer alone is enough motivation,” said Clottey.
The Ghanaian had been impressive in his last two fights, whipping Jorge Silver and Anthony Mundine.
Rosado on the other-hand (21-9, 13 KOs) recorded four defeats from his last five fights (one no contest), with three of those defeats coming by knockout.

The rugged Philadelphian is one of the most exciting fighters in the sport, but would have a tough assignment against Clottey, who possesses a high guard.