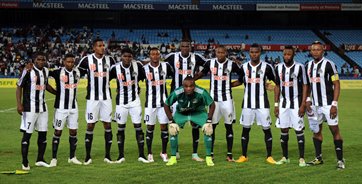 Club America scored first half goals from forwards Dario Benedetto and Martin Zuniga   to a get a 2-1 win over TP Mazembe at Osaka Nagai Stadium’s penultimate game at the FIFA Club World Cup Japan 2015.

Ignacio Aguilar’s side came into the match hurting following their last-minute loss against Guangzhou Evergrande in the quarter-finals, while Patrice Carteron was looking for a vast improvement from the CAF Champions League winners who were well below par in their 3-0 loss to Sanfrecce Hiroshima.
While both coaches witnessed improvements, it will be Ambriz going home the happier, with the result a fair reflection of proceedings.
The game took some time to get going with Daniel Adjei’s deflected shot in the 12th minute heralding the start of a flurry of chances. Then a minute later, Oribe Peralta had two excellent chances to score within a matter of seconds. First, Sylvain Gbohouo blocked his initial attempt from close range and then he headed over Benedetto’s inch-perfect cross from the rebound.
It was Benedetto who opened the scoring in the 19th minute, producing a trademark downward header from a right-wing cross from Paul Aguilar.
However, it proved to be the No9’s last action of the match as he was stretchered off with what appeared to be a hamstring injury.
Zuniga, his replacement, made an almost instant impact. After Peralta saw his initial shot saved, the TP Mazembe defence then failed to clear their lines and the 22-year-old was on hand to poke the ball home.
However, the Crows failed to give up and almost pulled one back ten minutes before half-time when Patient Mwepu rattled the crossbar with a fine left-footed drive from 30 yards.
Both keepers made fine saves as the half drew to a close. The Africans were grateful to Gbohouo again as he showed great agility to turn away Osvaldo Martinez’s cheeky chip, while Club America captain Moises Munoz was at full stretch to tip Mbwana Samatta’s free-kick over the bar.
Two minutes before the interval, Patrice Carteron’s side forced their way back into the encounter. Munoz spilled Samatta’s strike and Rainford Kalaba was on hand to sidefoot home.
Slow start in second period
Just like the opening 45 minutes, the second half took some time to get up to full pace. Peralta went close, dragging a shot across the face of the goal, but that was the only chance of note between the 46th and 65th minutes.

The game then swung in the favour of the CAF Champions League winners who had two fine chances within a minute. First, Adama Traore’s left-footed shot almost caught Munoz by surprise, but the keeper managed to turn it out for a corner. From the resulting set piece, Salif Coulibaly flashed a near post header across the face of goal.
With TP Mazembe pushing for an equaliser, gaps were beginning to appear at the back. Andres Andrade went close when his attempt from long-distance caught Gbohouo unawares, but the effort drifted just wide.
The game drifted to its conclusion after that, with chances at a premium for either side.