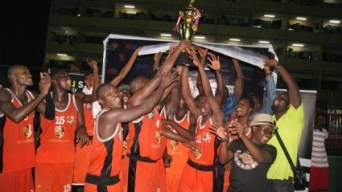 The maiden edition of the community basketball league in Ghana dubbed Rhythm and Rims came to an end on Sunday at the Accra Polytechnic School campus.
The competition which is being organized by the Game Time Entertainment, championed by Rush Energy Drink and Adidas saw the Osu Hawks being crowned as Champions after 10 weeks of parked action.
This year’s Community Basketball League saw 10 participating teams namely Dansoman Chiefs, Tema Sharks, Nima Vipers, Tudu Warriors, and the Korlebu Kings.
The others include Cape Coast Bears, Ashaiman Tigers, Sakumono Chargers, Teshie Lions and the Osu Hawks who emerged as victors of the inaugural competition.
After weeks of thrills, drama and excitements, four teams namely the Tudu Warriors, Tema Sharks, Ashaiman Tigers and the Champions Osu Hawks made it to the semi finals.
The first Semi-final game which was keenly contested between the Tema Sharks and Ashiaman Tigers saw the latter winning by 88-77 at the end of overtime period after both sides had squared off with a 74-74 score in regulation time.
A determined Ashiaman side managed to seal through to the finals after dominating the latter part of the overtime period to beat their counterparts with a 10 points difference.
In the other Semi-final game the Tudu Warriors which was coached by the veteran and reigning best coach in Ghana Brimah Lawal could not match the strength of their counterparts from Osu who were unbeaten in the competition as they succumbed to 62-47 after regulation time.
Despite their unbeaten record, the team from Ashiaman were eager to cause an upset over their counterparts from Osu as they took an early lead at the end of the first quarter in the finals between to two sides.
The resilient and composted Osu team managed by Daniel Dra wipe up their counterparts by beating them 80-74 to win the 2015 edition of the Community Basket Ball League.
Dra after the game expressed his delight at his side’s triumph.
“Technically we were disciplined that is our secret and that is what made us win the game and I will say am very happy.
“Every member is happy as well because this feat did not come easy. So we are all happy.”
The team from Osu however received the whooping prize money of $US3, 000, a trophy and souvenirs from the sponsors of the competition, while second placed Ashiaman took home a cash prize of $US1, 500 plus souvenirs from the sponsors.
Power forward for Osu, Emmanuel Dickson was adjudged the most valuable player of the competition and was rewarded with GHC1, 000 and items from Rush energy drink.
He also shared his thoughts after the game.
“I had really prepared for this tournament, I spent time a lot to train and I think my hard work has yielded results, the Custom officer said.
The Community Basket Ball is however expected to be organized annually.