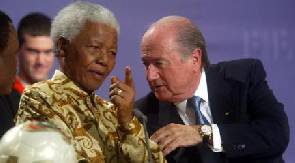 Ghana FA boss Kwesi Nyantakyi insists suspended FIFA boss Sepp Blatter has left an enviable legacy for Africa which cannot be eroded.
Blatter and UEFA president Michel Platini are serving an eight-year ban from football-related activities following an ethics investigation.
The two most most powerful men in world football were found guilty of breaches surrounding a £1.3m ($2m) “disloyal payment” made to Platini in 2011.
Despite the constant media attack on Blatter since his re-election this year, the Swiss has remained extremely close to the heart of African nations.
Blatter, 79, enjoyed tremendous support across the developing world, bolstered by his Goal project which delivers millions of dollars to improve facilities.
With Blatter out of the picture following stormy media attack on his presidency, Ghana FA boss Kwesi Nyantakyi continues to tout the achievement of the suspended FIFA boss, insisting his legacy will live on.
“As human as he is you don’t expect him to be perfect, obviously there will be pitfalls,” he told TV3, an Accra TV Station.
“These are shortcomings that have been identified.
“The sanctions have been applied but I think the legacy of Blatter still remains.
“He has done well for African football.”
Under Blatter’s presidency, Africa had its first World Cup (South Africa, 2010) as did Asia (Japan and Korea, 2002).
The number of World Cup places for teams also increased exponentially from two to five for Africa and four for Asia.
Many developing nation see the attack on Blatter as a campaign by UEFA to return the world governing body to the dark days when the old European governing body, controlled the game.
Blatter fought their aggression and criticism to the zilt until a latest ruling by FIFA’s ethics committee found him guilty of ‘abusive execution’ of his position.