Donsah in Ghana to shoot documentary with Bologna TV 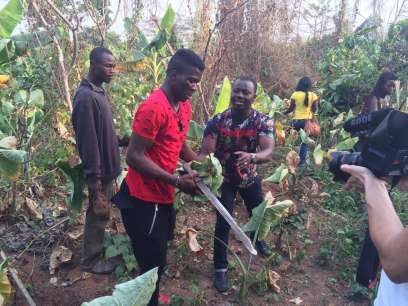 Godfred Donsah’s rapid rise in his still budding football career is set for the big screen soon courtesy a documentary on the youngster.

The 19 year old Ghanaian whizz kid has arrived in the country for shooting of the story of his young life with the crew of his Italian Serie A side, Bologna TV.

The documentary which is the exclusive property of Bologna TV will also be shown on Sky Sports Italia to showcase the quick rise of the teenage sensation.

Donsah’s parents are interviewed in his hometown of Daadom in the Brong Ahafo Region in The Ghana chapter of the documentary.

The rugged midfielder also took Bologna TV to his parents cocoa farm where he used to work as a child.

Speaking exclusively to Pulse Sports, Donsah expressed awe with the warm reception offered him on his return to his hometown and has revealed plans to assist the youth realize their career objectives.

“It’s so amazing the welcome my people have given me, it’s like I’m the new king of the town. I must confess I’m overwhelmed,” Donsah said.

“I think there are a lot of talents here who can become even better than myself and I will do my best to support them in my own small way to achieve their dreams. We’ll set up a charity to push not just aspiring footballers but the entire youth to pursue their dreams,” the 19 year old pledged.

Attached are some photos of Donsah back in his hometown, click to watch them all.