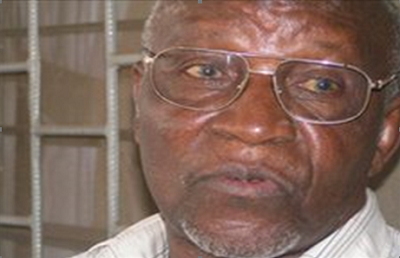 Honour and due recognition is coming the way of the late Charles Kumi Gyamfi, one of Africa’s greatest football legends as the 2015 Edition of the Glo-CAF awards is to honour him with an Africa Legend Award at the ceremony slated for Abuja, Nigeria.
Born on December 4 1929, Gyamfi had his secondary school education at the Accra Academy (same school that produced Asamoah Gyan).
He played football for the Koforidua Sailors Football Club, Cape-Coast Ebusua Dwarfs, (also known as Cape-Coast Mysterious Dwarfs), Asante Kotoko, Kumasi Great Ashantis and Hearts of Oak.
Gyamfi was the first African player to play in the German league, when he joined Fortuna Dusseldorf in 1960. He also captained the national team, Black Stars.

His glorious years came as a coach. He had managed the Municipal Club, AFC Leopards, Ashanti Gold and the Somalia U-21 team. None of them was however as fruitful as his exploits with the management of the Ghana National team.

Legend – C.K. Gyamfi was buried at a State funeral in Accra last weekend

He thrice won the Africa Cup of Nations coaching the Ghanaian national team. This was in 1963, 1965 and in 1982. He equally handled the Ghana national football team during their Olympic debut at the 1964 Summer Olympics and the 1972 edition.
These feats made him the most successful African national team coach, a record he held until Egypt’s Hassan Shehata also won a third Nations Cup title in 2010.
He was passionate about the game and wished today’s footballers would find more obsession in the game than in the love of the monetary reward. In 2008 he once lamented in an interview the unbridled race for money by players and their lack of commensurate passion for the game.
He passed on in September 2015 at the age of 85.
Credit: Glo Mobile Ghana