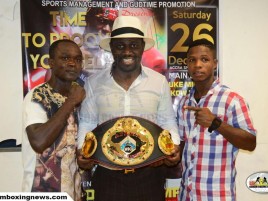 Streetwise Promotions, Errol Hawk and Gudtime Promotions have unveiled the boxers who will be doing battle on Boxing Day, December 26 at the Accra Sports Stadium.

The card has been dubbed “Time to Prove Yourself” by the promoters – the combatants were unveiled during Tuesday’s press conference at the Accra Sports Stadium Media Center.

Saturday’s main event is the vacant WBO African bantamweight title bout between undefeated Duke Micah (13-0, 13 KO’s) and Ekow Wilson (15-1, 13 KO’s). Scheduled for 12 rounds, this headliner is a rematch of their first encounter in 2014, which Micah won via third round TKO.

The co-main event features a 12-round clash for the vacant WBO/WBA African featherweight title between Isaac Dogboe (9-0, 5 KO’s) and George Krampah (13-2, 11 KO’s).

Other undercard bouts include a 12-rounder between Justice Addy and Isaac Aryee for the vacant national welterweight title.

Kpakpo Allotey and Abdul Aziz Quartey will war against each other in an eight round super lightweight contest whilst Thomas Awinbono faces George Bamson in a super middleweight contest billed for ten rounds.

Maxwell Amponsah and Stephen Abbey will engage in an eight round contest in the light heavy weight division.

The official weigh-in for “Time to Prove Yourself” will take place this Friday at 2:00 PM (14:00 GMT) at the Accra Sports Stadium Media Center.