Bukom Banku and Powers ready for rematch in Kumasi 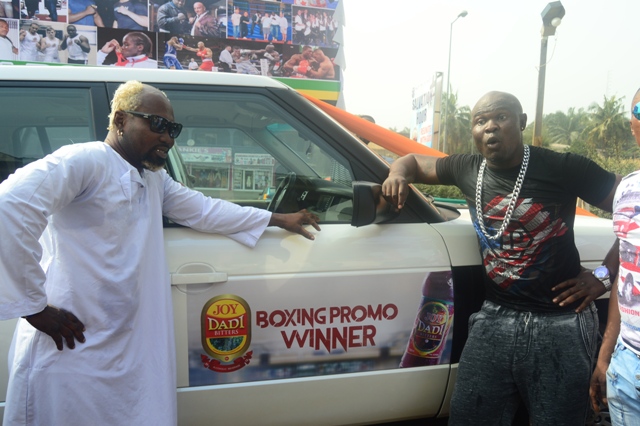 A surprisingly trim Kamoko tipped the scales at 90kgs while the heavier Powers came in at 93kgs.

Kamoko won their highly-attended first fight in Accra in May 2014 and has vowed to once again topple his age-long rival when they face off at Baba Yara Sports Stadium.

It’s been labeled “Repeat or Revenge” but Kamoko is promising a similar outcome, only this time he’s prophesied a quick ending, as opposed to their 2014 encounter which he won by unanimous decision.

“This is my Range Rover! Ayitey Powers, I will beat you again. I am not joking at all, I will stop him, by round seven the fight will be over,” Kamoko declared following the weigh-in, as he stood in front of the brand new car that will be awarded to the winner.

Powers appeared subdued but the calm underdog would hear none of what he called Kamoko’s “brags.”

“It’s not about what Bukom Banku says but what he does in the ring,” he noted. “I’ve learnt my lessons (from the first fight) and I’m ready to silence him for good. Tomorrow, by God’s grace, I’m going to be the winner in Jesus name.”

Attendance for “Repeat or Revenge” is expected to topple that of their 2014 encounter as the countdown to Saturday night quickens among fight fans in Ghana’s second largest city of Kumasi.

Both boxers are expected to earn their largest paydays. The winner will also be awarded the aforementioned Range Rover (branded by sponsors Joy Dadi Industries) and a trip for two to South Africa.

Musicians D-Black, Sarkodie, Kwaw “Abodam” Kesse, Pope Skinny and others are also expected to spice up the show with live musical performances.