Micah and Wilson on weight for Boxing Day bash in Accra 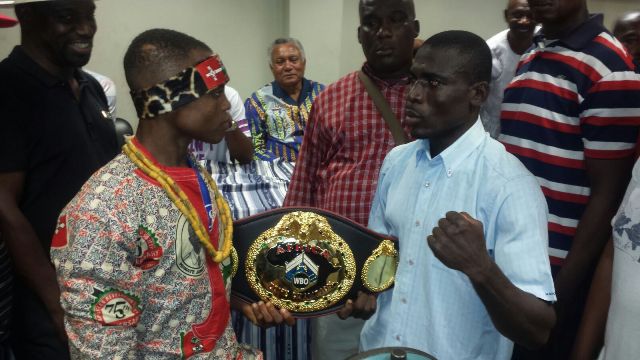 Isaac Dogboe and George Krampah at the weigh-in

Duke Micah and Ekow Wilson are on weight ahead of their vacant WBO African bantamweight clash tomorrow night at the Accra Sports Stadium Sports Hall.

A fired-up Micah scaled 118Ibs with Wilson weighing the same. The two fought in March 2914, with Micah stopping Wilson in three. Wilson is looking to exact revenge but the surging Micah sees only a stepping stone in the way of his quest toward a world title.

In the co-feature, Isaac Dogboe tipped the scales at 124lbs. However, opponent George Krampah needed extra time to make the featherweight limit before coming in at 126lbs. The duo will be fighting for the vacant WBO/WBA African featherweight title.

Below are the weights for the rest of the bouts scheduled on Saturday’s packed card: