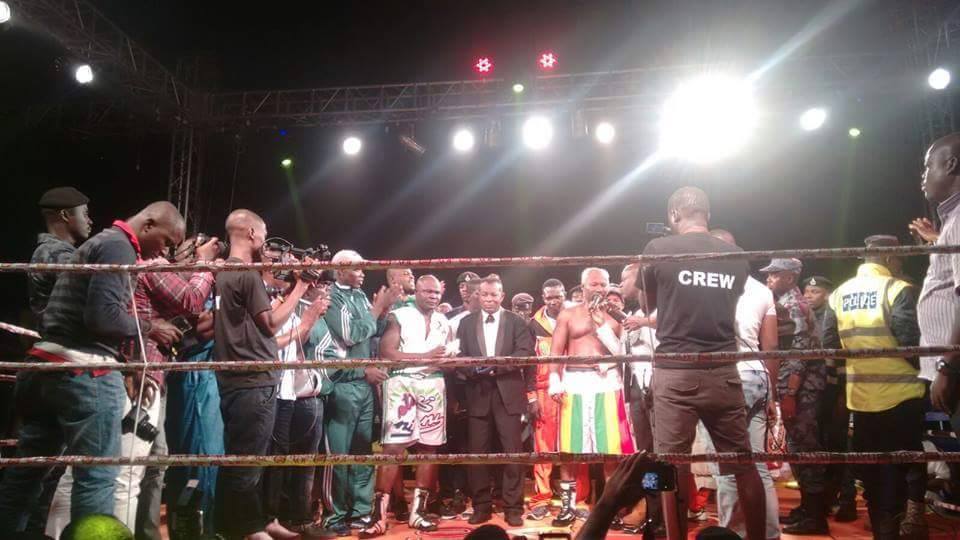 An estimated 25,000 raucous fans were on hand at the Baba Yara Stadium in Kumasi to witness the long-awaited rematch between Braimah “Bukom Banku” Kamoko and Ayitey Powers. In the end, the record-setting crowd witnessed a repeat, not revenge, as Kamoko proved his superiority by demolishing his local rival via sixth round TKO.

Kamoko’s performance was even more dominant than his one-sided unanimous decision win over Powers in 2014. After an even first that saw a competitive Powers stand his ground, “Banku” took over, pummeling Powers from the second round on.

Banku Clinched and Jabbed,  adding uppercuts, and an assortment of blows to the head and body to win the day. Kamoko heaped so much punishment on his old adversary that Powers could only resort to incessant clinches as he found no antidote to the power and speed of the aggressive and efficient Kamoko.

“Banku” then fulfilled his prophecy that the fight would not travel beyond five rounds. A motionless Powers remained rooted to his corner at the sound of the bell for the 6th round, forcing referee Emmanuel Brenyah to call the bout off and crown Kamoko the winner.

Powers admitted afterwards that he had lost to the better boxer.

“I can now say with no shame that ‘Bukom Banku’ is the champion because he has now beaten me twice. I tried to take the fight to him in the first round but he proved too strong,” said the boxer whose career record fell to 21-25-1 (17 KO’s).12 27 15 – Powers

Kamoko was compassionate in victory. “Ayitey Powers is my brother and my best friend so I didn’t want to punish him too much otherwise I would have ended the fight earlier. I’m pleading with Joy Dadi to buy him a ticket so we can go to the South Africa trip together.

“I am looking to fight for six more years before retiring. I’m ready to take on the best cruiserweights in world boxing and I’m appealing to Joy Dadi to sponsor an international fight for me soon so I can silence my critics,” said the boxer whose hasn’t fought outside his native Ghana.

The night was spiced up by musical performances from Ghana’s top artists, including Shatta Wale, Sarkodie, Abodam Kwaw Kesse, and Efya among others.