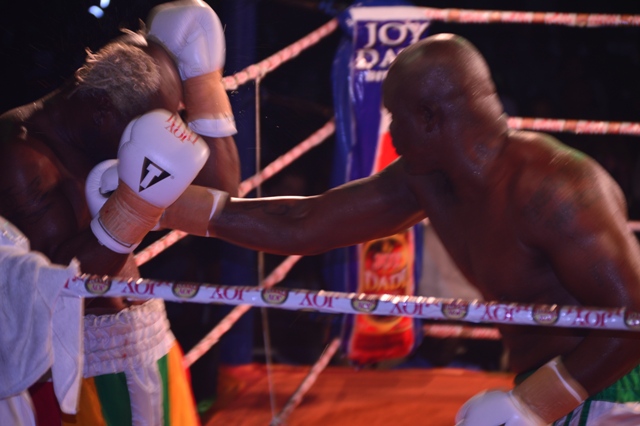 Bukom Banku is the new recipient of a brand new SUV Range Rover and a ticket for two to holidays in South Africa as well as a whooping cash prize of GH¢100,000 after knocking out age-long rival, Ayitey Powers in their match anticipated rematch at the Baba Yara Sports Stadium on the night of Boxing Day 2015.

Keen to gain a revenge for his defeat in their 2014 clash, Ayitey Powers started the more aggressive and appeared to gain the measure of Bukom Banku in the opening round.

Kamoko soon found his rhythm however and began unleashing a plethora of punches, uppercuts and jabs all over the face and body of Powers right from the second round and it remained that way for the rest of the fight.

Banku continued with his dominance amid a desperation to achieve his much trumpeted promise to knock out his opponent in five rounds.

So it came to pass that Powers failed to answer the bell for round 6 as he remained rooted to his corner, referee Emmanuel Brenya had no choice than to declare the fight over and Braimah Kamoko the winner after 5 am on Sunday morning.

A total of ten fights on the bill was spiced up by musical performances by Ghana’s top artistes, Shatta Wale, Sarkodie, Kwaw Kesse Abodam, Efya (who sang the Ghana national anthem), D-Black and others including actors, John Dumelo and Kwame Dzokoto.

Exchange of jabs between Ayitey Powers and Bukom Banku