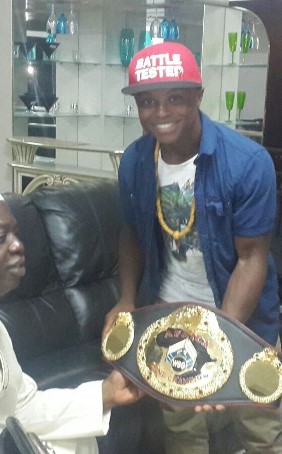 The newly crowned World Boxing Organisation (WBO)-Africa Featherweight Champion, Issac Dogbe has paid a courtesy call on Alhaji Enusah Sally, the CEO of Enus Enterprise Ltd.
The visit was to present the title he won against Krampah at the Accra Sports Stadium.
Dogbe, expressed appreciation to Alhaji Enusah for the support he offered him before, during and after the fight.
Alhaji Enusah on his part congratulated the boxer and urged him to maintain his spirit and work harder because there is light at the end of the tunel for him as a potential world champion.

Before the fight Dodzi promised to give out fireworks, and that was what he did against his tough opponent who has called for a rematch as he is not satisfied with the knock out.