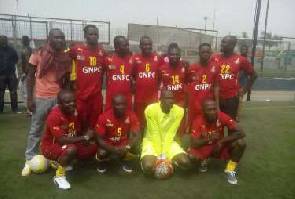 Sports journalist last Saturday at the Lizzy Sports Complex beat the staff of the Ghana Football Association by three goals to one in a 6 aside football game.
Two goals from the host of Hot FM’s Andy Kwaku Obeng, popularly known as Maestro and a goal from Clement Osei Aboagye, a producer for Oman FM sealed victory for the media team.
Hot FM had four players in the media team, namely Maxwell Asabere, Nana Kwame Danquah , Gabriel Obu and Maestro.
It was fan galore on Boxing day as GFA senior and junior members including the GFA President Kwesi Nyantakyi and his Vice President George Afriyie, Black Princesses head coach Didi Dramani played in two friendly games against their sponsors, namely Unibank and GNPC whom they lost 6-0 and 3-1 respectively before losing out to the media team.
Asamoah, Gyan, the skipper of the Black Stars and two other Black Stars players, Jonathan Mensah and Agyemang Badu were also at the Lizzy Sports Complex to watch the fan games, but Badu, the Udinese midfielder played for the GFA in their game against the media.