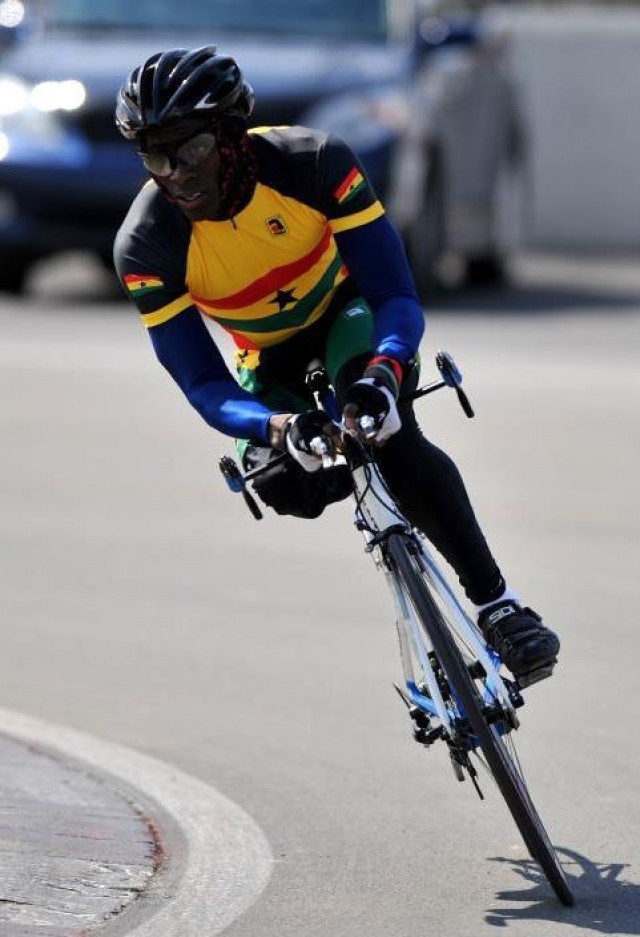 Ghanaian Para-cyclist Alem Mumuni is continuing to help under privileged children and families in the African nation as part of his work with the Alem Foundation, set up after he became his country’s first-ever Paralympic cyclist at London 2012.

Mumuni made history when he competed in London three years ago and finished last in the time trial before pulling out of the road race due to falling ill with chicken pox and a chest infection prior to the Games.

Following his ill-fated Paralympic appearance, he set up the Alem Foundation with Britain’s Alexandra Main, who coached Ghana’s Para-cyclists at London 2012, in order to educate children and provide basic amenities to less privileged villages in his country.

Since its inception, the Foundation has sponsored 33 children in the village of Akosombo to attend school and has helped buy water filters for 72 families.

It has initiated other projects including funding necessary operations for disabled or sick children and registering youngsters in the public healthcare system.

Mumuni developed Poliomyelitis in his right leg at the age of two and did not learn to walk until he was 11, when he did so with the help of a wooden stick.

“I got fame (as a result of the Paralympics) and that had a lot of impact on society,” Mumuni said.

“It gave me connections and introduced me to people who supported my cause.

“It has made a huge change in Ghana to the perception that persons with disabilities are social parasites… beggars.”

Mumuni harbours hopes of competing on the Paralympic stage once again as he is still chasing qualification points for Rio 2016.

He recently attended the International Cycling Union World Cycling Centre’s Para-training camp in a bid to hone his preparations for next year’s Games in the Brazilian city, which came after a campaign was launched to raise the necessary funds to get him to Rio.

“I love cycling but I am also using it to give back to society,” he added.

“My biggest aim is to give children the opportunity to get an education and to give them a quality of life to be our future leaders.

“So finally, when people ask me if my disability has been a curse, I can honestly say: ‘No, it has been a blessing.’”

Ghana has never won a Paralympic medal and sent a team of four athletes to London 2012.