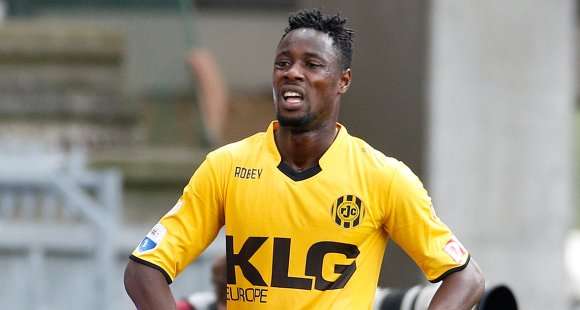 Ghana international, Richmond Boakye-Yiadom has left Roda JC Kerkrade, the Dutch club he joined on loan at the beginning of the season, Pulse Ghana Sports can exclusively report.

Boakye switched from Italian Serie A side, Atalanta on a season’s loan but has now asked for the contract with Roda to be terminated halfway after falling out with Darije Kalejic, the 46 year old Swiss born coach of the Eredivisie side,

“Of course I’m still a player of Atalanta but it does not mean I’m going straight back there, everything now is in the hands of my manager, he will work out where I play next,” the 22 year old striker told Pulse Ghana Sports.

He has left Roda after playing just nine games for the club but Boakye’s only regret is not getting more opportunities to pay back their fans for their support and love.

“I feel like I’m leaving with an unfinished business. I wish to have demonstrated something nice and different for the supporters during the second round. It’s unfortunate but I thank them for all their love during my time there,” Boakye reflected.

“I am hoping that God will open a way for me and I will continue my career successfully,” he added.

Meanwhile, the Roda official website have confirmed the departure of the Black Stars forward:

“Richmond Boakye was hired last summer from Atalanta Bergamo. The 22-year-old Ghanaian said that he does not feel happy in Kerkrade and has asked for his contract to be cancelled. Boakye played in nine league games for Roda JC and now returns to Atalanta Bergamo,” it said.