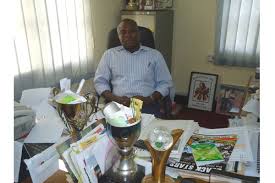 Experienced football administrator Ashford Tetteh Oku will be confirmed as the new chairman of the Premier League Board (PLB).
Oku who is until now the Vice Chairman of the PLB will be handed the post in the ongoing reshuffling of all statutory and adhoc committees of the Ghana FA.
The former Administrative Manager of Hearts of Oak will become the substantive replacement for Welbeck Abra Appiah who has communicated his decision to step down after 10 years in the job.
Oku became the obvious choice due to his immense wealth of experience and efficiency in discharging all duties handed him.
He remains one of the most decorated football administrators in the country having undergone several professional courses in football management.
The Premier League Board is made up of the chairman and his Vice – appointed by the Ghana FA – and a representative each from the 16 clubs in the Premier League.