Accra Hearts of Oak yet to sign new players 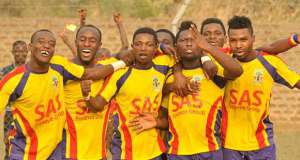 Hearts of Oak yet to sign new players to replace sacked ones.

After sacking five newly signed justify players due to poor show in Tripoli, Libya, against Al- Ahli in their two-legged international friendly Ghana premier league giants Accra Hearts of Oak are yet to sign new players to replace them.

According to footballgh.com source close to the team management they haven’t concluded any deal on any player as it is been reported in the media that “The Phobians” are on the verge of signing some new players.

“As at now the team hasn’t concluded or finalized any deal on player.”

“When we finalized or sign some we will let the media know, he added.”