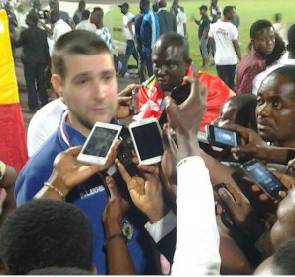 FK Jagodina coach Vladica Milanovic has blamed his side’s 5-0 defeat to Kotoko on fatigue.
The Serbian side endured a torrid time in Kumasi after going down heavily against the Ghanaian giants in an anniversary game on Sunday.
The European had little rest before the game after arriving in the country barely 24 hours before kick-off.
The team looked depleted after the team touched base with only 13 players.
And coach Vladica Milanovic has been quick to point to fatigue for his side’s embarrassing defeat

“My players did not get enough rest for this game,” he said.
“We took four different flights to arrive in Ghana so the players were tired and we didn’t have any time to rest.”