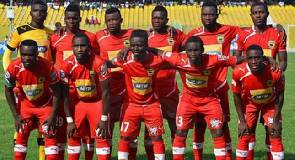 Asante Kotoko thrashed Serbian side FK Jagodina 5-0 in their 80th anniversary celebratory match on Sunday in Kumasi and the aftermath has not been short of controversies.
Following Jagodina’s disgraceful defeat- a day after touching down in Ghana from Serbia via a transit in Istanbul, Turkey – renowned Serbian journalist Dejan Stejanovic called the loss a “shame”, slamming Jagodina for showing up with“fake” players.
Former Ghana deputy sports minister Osei Bonsu Amoah called for an investigation of the match after it emerged that Jagodina acquired the service of players and coaches in Ghana to be able to raise a team for the game, an act that has left the president of Techiman City, Charles Kwadwo Ntim, threatening to lodge a complaint with Fifa for “unlawful use” of his player Ebenezer Agyapong.
“Most parts of Istanbul had been taken up by snow,” Eric OppongYeboah, the chief executive officer of organisers of the match Pacifica Football Ghana Limited, narrated the Serbian’s challenges going into the game.
“By the time they left Belgrade [Serbia] to Istanbul, five members of the original squad had to be dropped for some reasons. Between Istanbul to Accra, seven more players were dropped. They got to Accra with a 13-man contingent; 11 footballers and two officials.
“We realised after their arrival at the airport that their luggage had also been left in Istanbul; thus no jerseys, no boots. So after bringing the team from Accra to Kumasi, we arranged new kits for them.”
Jagodina were a late confirmation for the game after earlier withdrawals of Romanian side Petrolul Ploeisti and Greek side FC Veria.