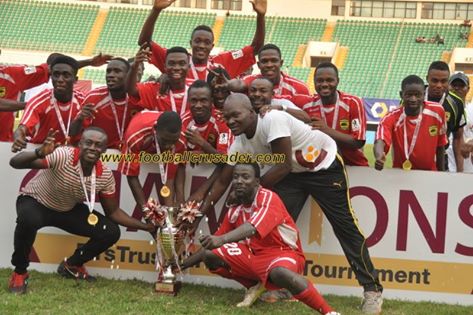 Kumasi Asante Kotoko won the maiden FirsTrust G6 competition after beating Aduana Stars 1-0 at the Essipong Stadium.
Aduana had the first chance as they were awarded a penalty in the second minute but experience right back Godfred Saka saw his predictable penalty kick saved by Ofori Antwi.
The first half was overly physical with loads of rough tackles and Asante Kotoko striker Kwame Boateng was the major casualty. He sustained an injury from a bad foul on him and had to be substituted.
The Porcupine Warriors got the breakthrough goal immediately after break.
Michael Yeboah fell down in the box and the referee did not hesitate to point to the spot.
Burkinabe Halipha Sedogo slotted the ball under the roof of the net to tear the virginity of the game.
Coach Nurudeen brought on experienced Yahaya Mohammed
It did not take the former Kotoko player too long on the field to make an impact, forcing a brilliant save from Kotoko’s shot stopper Antwi.
The victory means Kotoko have now won three pre-season trophies after choking success in SWAG Cup against Ghana League champions AshantiGold and their 80th Anniversary Cup against FK Jagodina.

Ofori Antwi was voted man of the match and subsequently crowned with the goalkeeper of the tournament award.
Aduana Stars’ Yakubu Mohammed also collected the best defender award following his stellar and solid outing at the heart of Aduana’s defence.
The overall best award went to striker Kwame Boateng for his exploits whereas another Kotoko newbie Bennett Ofori took home the discovery of the tournament award

Kwame Boateng who joined the Kotoko this season with his impressive form netted goals to power the Club win their third preseason trophy.

The ex- Great Olympics striker was on target  when Kotoko beat  3-1 Berekum Chelsea after coming off the bench to score his side’s third in the 81st minute.

Bennett Ofori Ansu Kotoko midfielder was adjudged the discovery of the tournament after helping his Club to win the GHALCA G6 competition.

Ofori was outstanding for the Porcupine Warriors throughout the tournament.

The former Berekum Chelsea midfielder put up an inspiring performance to propel his side in their 1-0 win over Aduana Stars in the finals on Sunday.

His enviable performance saw him win the discovery of the tournament accolade.

The former Berekum Arsenals midfielder Kingpin will be hoping to maintain his form ahead of the new season.

Nicknamed “Cristiano Ronaldo”, the enterprising midfielder helped Chelsea to finish fourth at the end of the 2014/15 Ghana Premier League season.