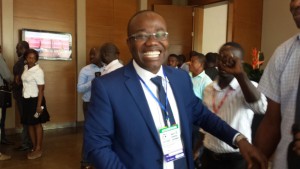 Ghana’s FA president Kwesi Nyantakyi has been re-elected  as the President of the WAFU Zone B and he will be in office until 2020 before another election is conducted.

The Congress of the West Africa Football Union Zone B resolved that there will be no term limit for presidents of the zone.

At a Congress held at the Movenpick Hotel in Ghana, the General Secretary of the Zone B of the West Africa Football Union, Aka Malan said they have agreed to go by what the umbrella body CAF adopted, hence no term limit for their presidents.

It will be recalled that the recent Congress of the Confederation of Africa Football held in Cairo Egypt came with resolutions that the body will not have term limits for their presidents and the WAFU Zone B is adopting the same thing.

Speaking at the event, Aka Malan said “We have resolved that following the no-term limit for CAF Presidents, we shall also go by that. That means that anyone who wins the seat can contest and be the president for so many years provided he wins.”

He also noted that the Union initially voted every two years to elect a new President but they have resolved to make it four years.

“We have also accepted to change the two-year office term to four years to offer leaders the opportunity develop the zone,” he added.

President Nyantekyi said he was happy to win the votes once again, though it did not come with ease as he won by 4-3 in the seven nation zone.

He hinted that WAFU has plans to organise competitions with the support of SuperSportTV and they are engaging marketers from Nigeria and other countries in the sub region to promote football in West Africa.

The WAFU boss said the major problem is funds, but they will succeed in the venture to revive the game among clubs.

West Africa Football Union Zone B will be introducing an inter-club competition aiming at helping member countries to prepare their clubs for major club competitions on the African continent.

At a media briefing at the Movenpick Hotel after the WAFU Zone B Congress, the newly elected president of the Zone, Kwesi Nyantakyi explained that they have agreed to introduce the competition to prepare their clubs better for major competitions.

He noted that the performance of clubs from the zone during CAF inter-club competitions has become a major issue of great concern to the zonal executives hence the introduction of the new competition.

According to the President,  the new competition is aimed at preparing clubs from the zone to perform creditably during continental and international competitions.

“This is a proposal tabled by Congress and our hope is that it will help our clubs to compete in inter-club competitions and not just to participate,” he added.

North African clubs have dominated the CAF Champions League and CAF Confederations Cup competitions with occasional appearances by clubs from the East African zone while West African Zone B clubs hardly make it to the finals of any of the competitions over the last ten years.